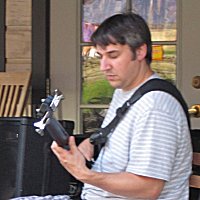 NYC Cases was originally founded as NYC Pedalboards in early 2001 by me, Mike Ruskin. As a veteran of the New York City gigging scene, I've had the benefit of first hand insight as to the needs of the working musician. This experience, combined with my background in design and carpentry has led to the development of a product line that is simple, practical and reliable. From my humble beginnings at a co-op workshop in New York City to our current location in New York's Hudson valley, NYC Pedalboards has grown to become a globally recognized leader in the world of pedalboards. In 2013, I created NYC Cases and expanded our offerings to include rack cases and microphone/utility cases. For further insight into our origins and philosophies, here are some excerpts from an interview by Premier Guitar magazine:

How did you get started making pedalboards?
Back in 2000, I was playing bass in a NYC-based band with a guitar player who used a ton of pedals yet had no pedalboard. Needless to say, it took a long time for him to set up and breakdown [and] it was a mess and took up a lot of stage space (It should be mentioned that he was on my side of the stage). We played most of our gigs at clubs with small stages where several bands played in the same night, so stage space was at a premium and it was imperative that bands could set-up and breakdown as quickly as possible. One day I put my foot down (no pun intended) and demanded that we solve the problem. We searched the stores and the internet for an affordable pedalboard that was large enough to hold all of his pedals, but it didn't seem to exist. So I decided to build one myself and the first NYC Pedalboard was born.

How has your design evolved since you first started?
The early versions had carpet as the pedal surface. I quickly found out that the carpet could not survive the repeated attaching and removing of pedals, so I upgraded to a genuine Velcro loop surface. The early versions also had a tray-style pedal surface that had a three-fourths inch lip all around it. This proved to be obstructive to the inputs and outputs of the pedals, so my next improvement was what I call the “no-lip” design.

Who were your first artist customers?
I like to think of all my customers as “artists.” I have yet to do an endorsement deal, nor have I solicited my products to widely known artists. With that said, many notable artists have discovered my products on their own, including Death Cab for Cutie, Brand New, Arch Enemy, Mercury Rev, Ike Willis (form the Mothers of Invention) and Dave Davies (from the Kinks). I think that Dave Davies was the first big name that I heard was using one. His rhythm guitarist (at the time) ordered one, and not long after he ordered another one—telling me that Dave had taken a liking to his so he gave it to him. I have been a huge Kinks fan since I was a kid, so I couldn't have been more thrilled to hear that a true legend of rock was using something that I built!

What makes your pedalboards stand out in the crowd?
I believe that its a combination of quality, practicality and affordability along with the fact that I will build one to the customer’s exact specs. I feel that I offer a fairly unique customer-to-builder communication process and I make a point of providing the highest level of customer service possible.

How long do you expect your pedalboards to last on the road?
A very long time. I provide a lifetime warranty, so in the rare event that something does require fixing, the customer can rest assured that it will be taken care of.